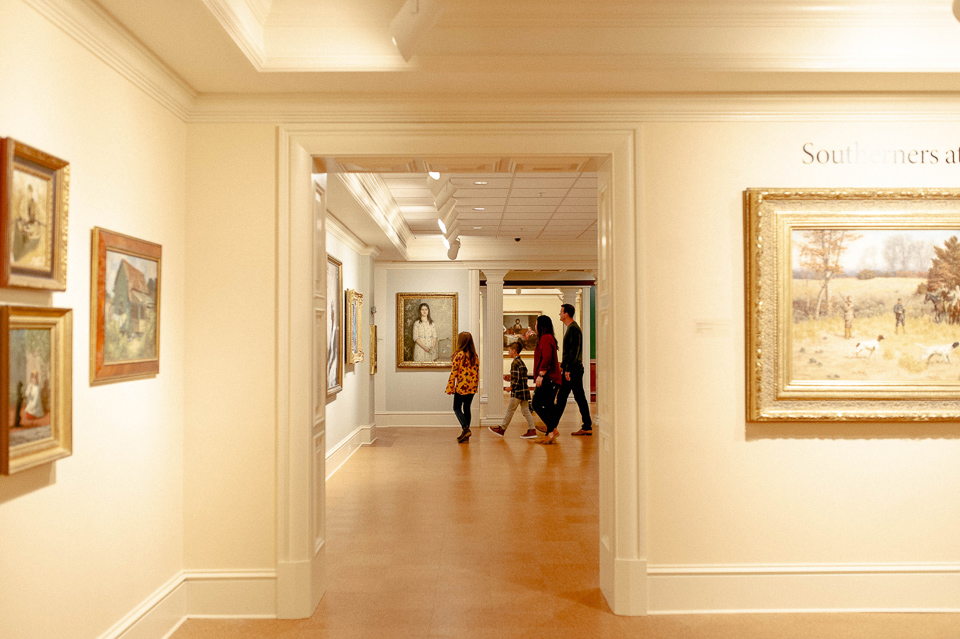 On a recent road trip from North Carolina to Florida, we stopped in Augusta, Georgia, to get acquainted with this up-and-coming Southern city. There we were delighted to discover one of Augusta’s top attractions: the Morris Museum, the oldest museum in the United States dedicated to the art and artists of the American South. The museum was established in 1985 by William S. Morris III, founder and CEO of Morris Communications Co. and publisher of The Augusta Chronicle.

The Morris Museum, which officially opened it doors in 1992, is a gem. In fact, you might call it a hidden gem, since it’s located on two floors of a modern 7-story office building (albeit an elegant one) right on Augusta’s scenic Riverwalk.

How many visitors, we wondered, walk right past, unaware of the treasures inside? And those treasures are legion. The permanent collection includes over 5,000 works of art—paintings, works on paper, photographs, sculptures and more—that date from the late 18th-century to the present. Some of America’s most important artists are represented here.

Note that the Morris defines “Southern” somewhat broadly.  An artist does not have to be a lifelong resident of the South to be part of the collection. Some were born in the South and moved away; others worked in the South or had Southern subjects.  Consider, for example, renowned New England artist Samuel F. B. Morse (you may know him as the man who invented the telegraph), who studied at England’s Royal Academy of Arts.  Prominent Southern families commissioned portraits by him.

We spent several hours at the museum and left with a copy of the book, A Southern Collection, published to celebrate the museum’s inaugural exhibit. Inside, reproductions of the collection are organized into categories that more or less match the present layout of  the galleries: antebellum portraiture, art of the civil war, the black presence in Southern painting, Southern still life art, landscape painting in the South, Southern impressionism, works on paper and contemporary Southern painting.

But this book is old news. On October 1, 2019, a new one will appear: Morris at 25: Selections from the Permanent Collection.  Introductory essays are provided by two prominent Southern scholars—art historian Martha R. Severens (she’s worked as a curator at several museums, among them the Portland Museum in Portland, Maine, and the Gibbes Museum in Charleston, South Carolina) and folklorist William R. Ferris, Senior Associate Director Emeritus of the University of North Carolina’s Center for the Study of the American South. This new book will largely feature works acquired since the museum’s opening.

The Morris is committed to community outreach.  Southern Soul and Song, an annual concert series founded and produced by the museum, starts in the fall and continues through the winter. The series features icons and rising stars in bluegrass, country, Americana, gospel and jazz. Other activities include book signings by Southern authors, film screenings, art lectures and symposia, and outreach programs to schools, hospitals, libraries and others.

The museum is home to The Center for the Study of Southern Art, a research and reference library that collects information about the art and artists of the South. It holds more than 19,000 volumes, including books, videos and sound recordings as well as magazines and journals about art and the South. Add to that several collections of artists’ personal papers and more than 25,000 vertical files about artists, museums and Southern topics.

If you’re going to be in the vicinity of Augusta this fall, be sure to take in these current and upcoming exhibits: Folk Art in the South: Selections from the Permanent Collection runs until December 31, 2019;  David Driskell: Artist and Scholar of the African American Experience begins October 10, 2019 and closes January 19, 2020.

Finally, on view now through October 27 is The Charleston Renaissance: Art, Architecture, Literature, and Music. The Charleston Renaissance was a cultural awakening that occurred in Charleston, South Carolina, between the two world wars.  As the exhibit’s introduction  explains: “The devotion to Charleston’s beauty and rich heritage by its resident artists and many visiting artists rescued the city from economic and cultural ruin and helped to create the modern historic preservation movement by awakening Charlestonians to the charm and significance of the city’s architectural heritage.” This exhibit includes paintings, drawings and etchings by artists of the Charleston Renaissance—Alfred Hutty, Alice Ravenel Huger Smith, Anna Heyward Taylor, Hobson Pittman and Elizabeth O’Neill Verner.