In early summer, we traveled to eastern France to explore areas we had never visited before. From Paris’ Charles de Gaulle airport,  we took a  1 1/2-hour train ride south and east  to the historic canal city of Strasbourg—a UNESCO World Heritage Site in France’s Alsace region. This city has the largest medieval town center in France and proudly hosts the oldest and largest Christmas market in Europe.

For three days, we strolled around Strasbourg’s old city, enjoying her architecture, historic sites, street life, wine bars and restaurants. There’s a hint of German in the air here, since Strasbourg has German roots that go back for centuries.  On the second day, we drove south on the super highway to nearby Colmar, another canal city, returning to Strasbourg via the scenic Route des Vins a’Alsace–the Alsatian wine route.   On the way, we stopped at  Riquewihr, one of 120 wine-producing villages in this 170-mile stretch of road.

The next day, we boarded a train for the the 6-hour journey south to Annecy, another  historic canal town in the department of Haute-Savoie. Situated on Lake Annecy in the foothills of the French Alps, it’s a popular  destination for boating, hiking and cycling. The final leg of our trip took us to Chamonix, the “Rooftop of Europe” and a popular destinations for skiers, hikers, cyclists depending on the season.

Below are a few images that provide glimpses of these fabulous destinations. 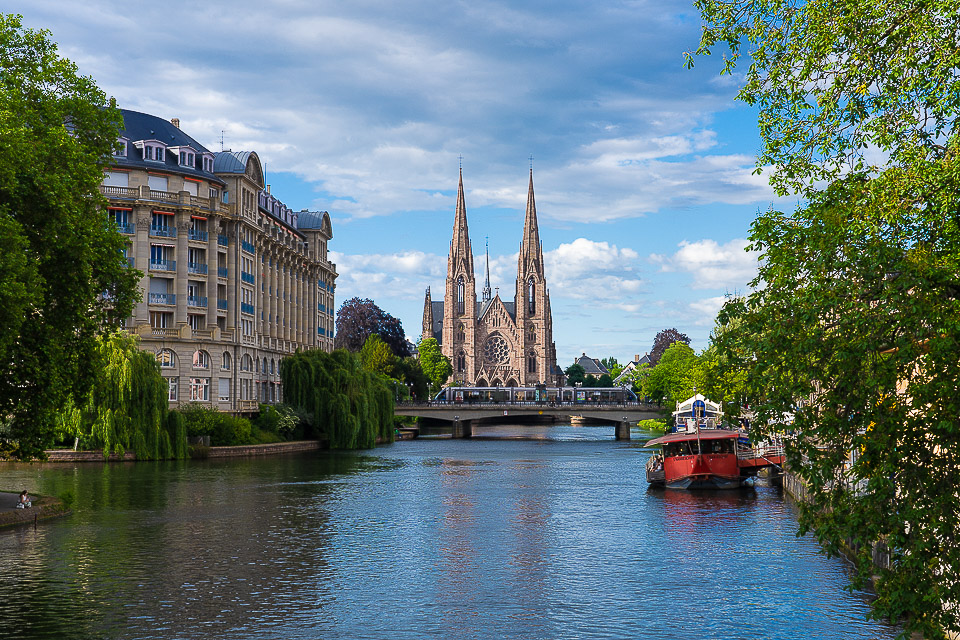 A view of St. Paul’s Church with one of Strasbourg’s many canals in the foreground. 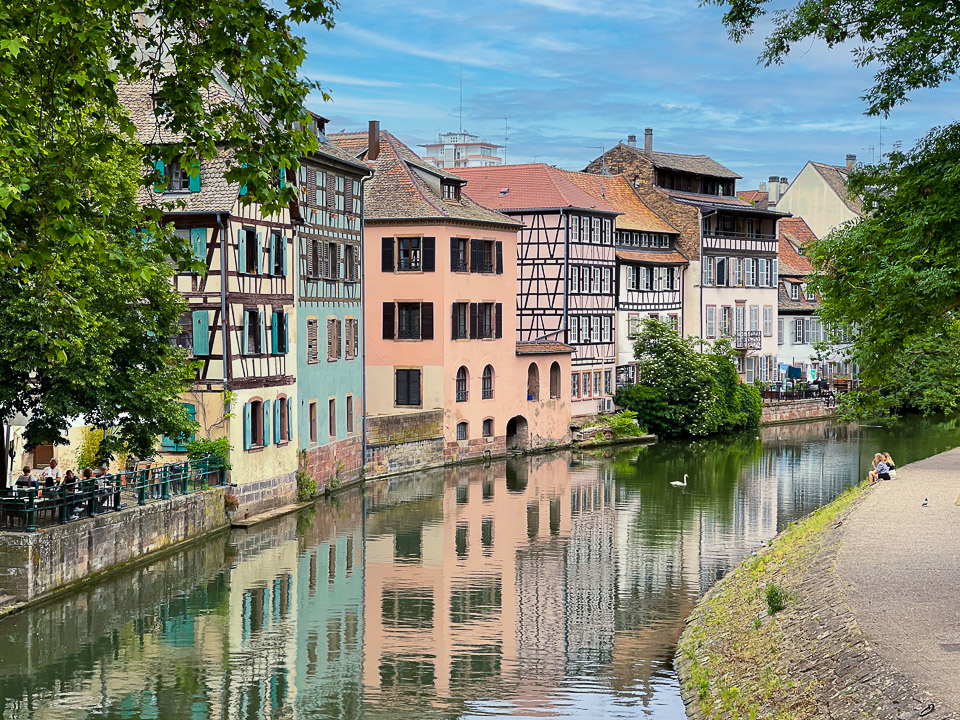 Medieval half-timbered architecture in the Petit France district of Strasbourg. 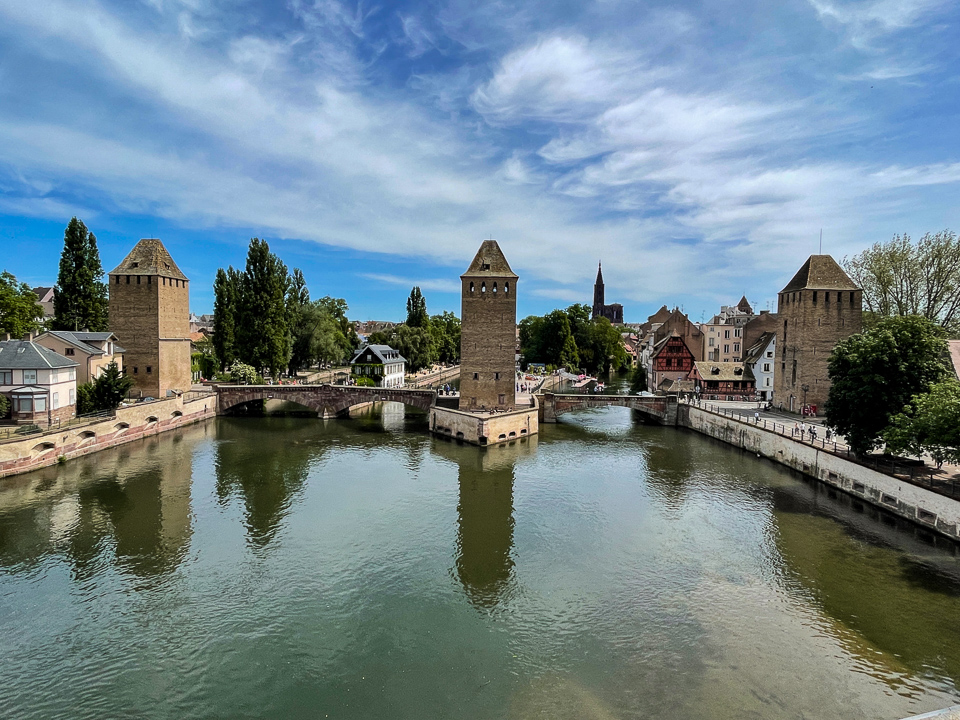 Les Ponts Couverts (covered bridges),  a set of  13th-century bridges and towers that once made up a defensive network for the Petit France district of Strasbourg 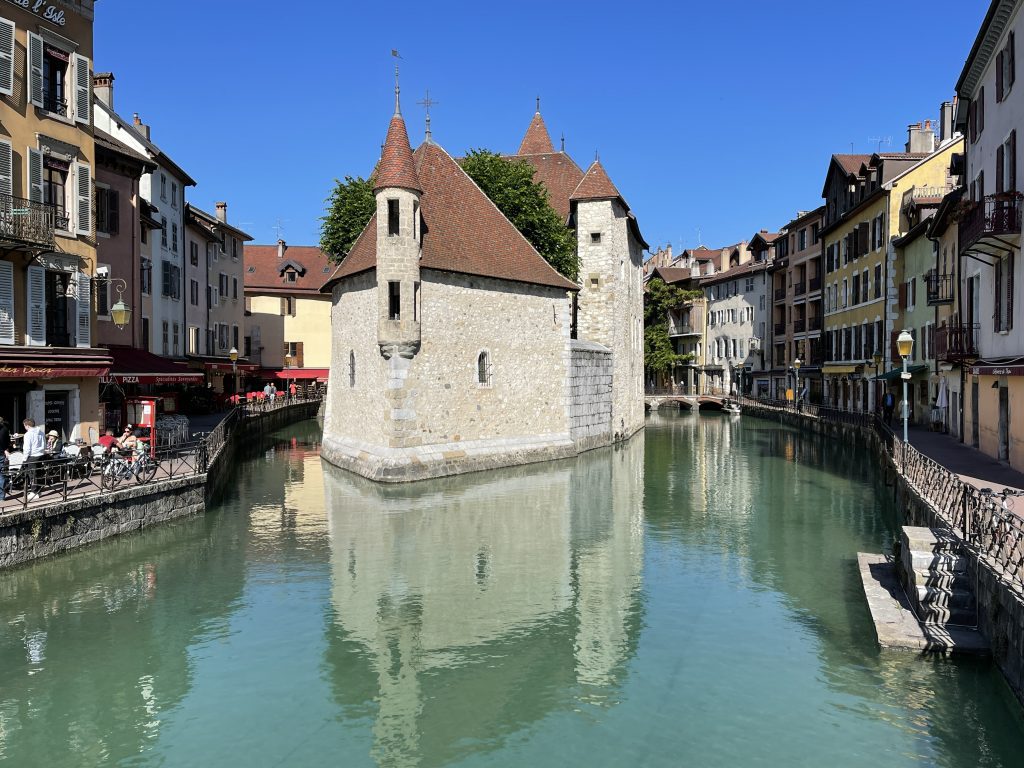 The Palais de L’Iile, a medieval house on one of the largest canals in the historic town of Annecy. 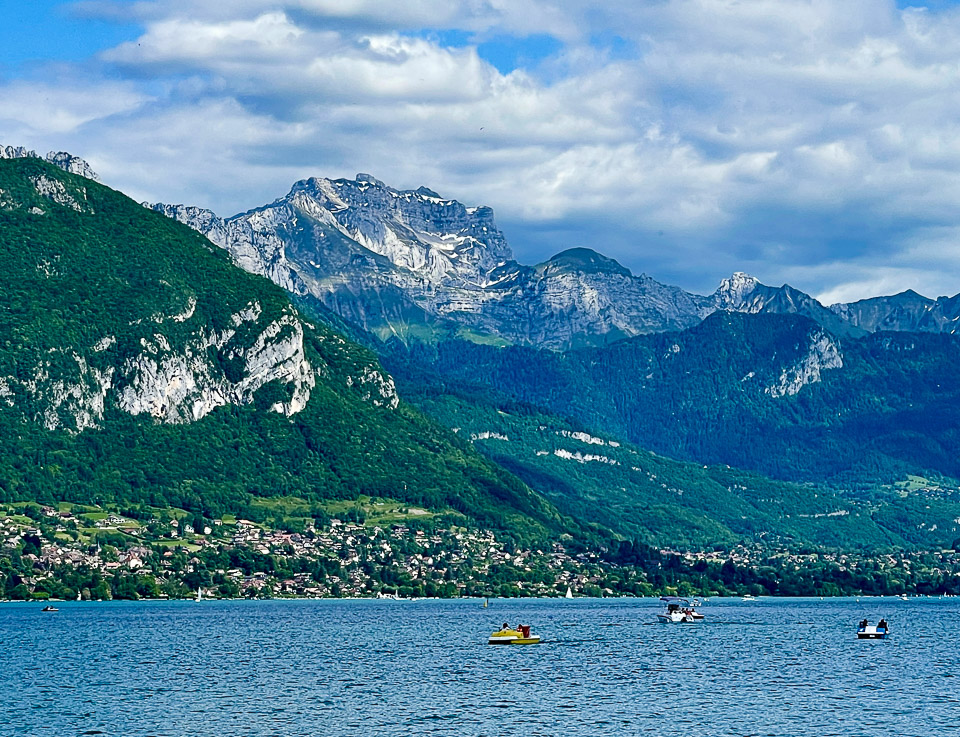 Lake Annecy, overlooked by the craggy foothills of the Alps—a scenic place for boating on a summer afternoon. 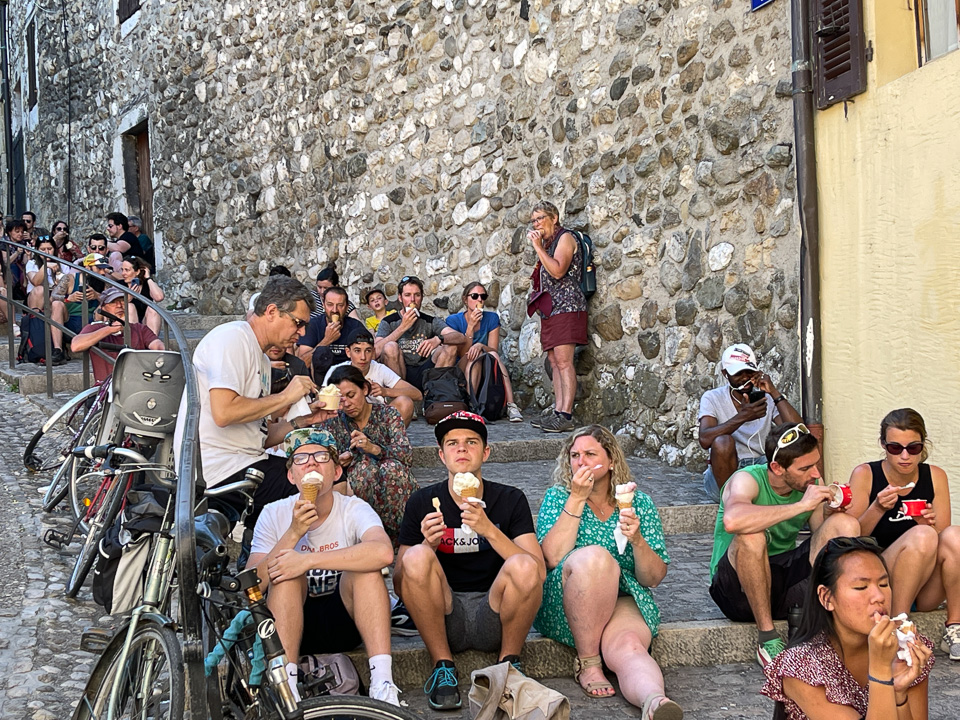 Enjoying an afternoon with ice cream on the cobbled streets of Annecy—a favorite French pastime. 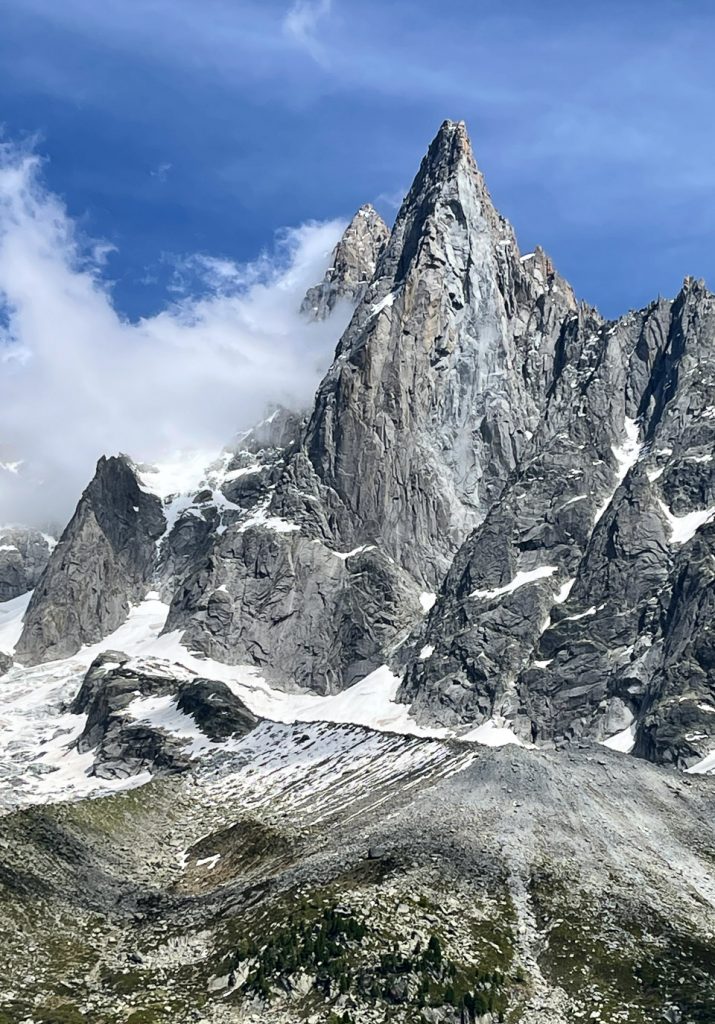 Les Drus, at 12,316 feet above sea level, is one of the most dramatic peaks in the French Alps and one of our favorites. 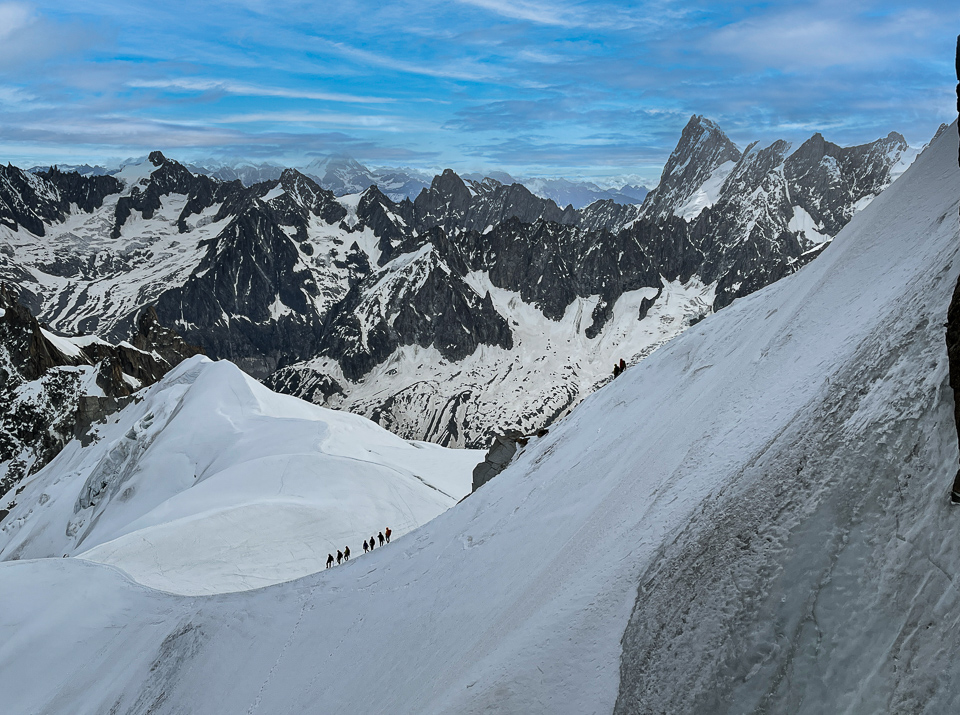 The “Rooftop of Europe” as seen from the Aiguelle du Midi summit above the town of Chamonix (elevation: 12,600 ft.) The cable car ride  to the top is not to be missed.